Jane Fulton Alt, from the series Crude Awakening, which highlights the hazards of oil spills, the right to clean water and climate change. | www.janefultonalt.com/crude-awakening © Sascha Pohflepp & Chris Woebken | Quarterspin from The House in the Sky, 2015

The year 1948 serves as an aperture through which we can rethink the history of the now; the decisive moment when the heap of fragments left by the fury of two world wars began to reassemble into new forms of technological, scientific, and cultural order that inform our contemporary situation. With the atomic age, the digital age and the age of the "hydrocarbon man” taking off, 1948 represents an inflection point for many developments and path dependencies to come. In fact, 1948 is one year of re-composing not only the world – the modern project of techno-cultural and geo-political design – but the planet. The technosphere is mobilized and with it we entered the Anthropocene.

In looking back at 1948 as the saddle point of the Great Acceleration (when population numbers, CO2 emissions, and water consumption climbed rapidly), one finds how this crystallizing of new scaffold and its activation of the planet as a technical operation space emerged from and cascaded through various sciences and industrial-scale research as well as political and artistic revolutions. Strikingly, the emergence of planetary-scale technology was effectuated by manipulations of tiny building blocks, components or “bits”: through modifying chemical compounds and setting detailed standards for global technics, politics, and economics, through experimenting with genetic material and with the way chance and risk are managed, through engineering functional materials and microelectronics, through algorithmic code, cybernetic dreams, and new epistemologies, the Earth we live on has been effectively re-arranged. This re-arrangement process now goes by the name “technosphere.”

From November 30th to December 2nd, lectures, performative elements, gatherings and installations, all differing in duration, visibility, and interaction investigate historic moments and the themes that tie them together. Diverse approaches from artistic research to historical groundwork will be taken to rework current epistemological categories and our ways of looking at the various histories that have striated this planet. Switches, Seeds, Hydrocarbons, Tokens, and Chance thus serve us as exemplary historical nuclides that contour the 1948 moment of the mobilization of the technosphere. These bit registers embroil topics such as the declaration of Universal Human Rights, the invention of the bipolar transistor and the invention of “the environment” as a global condition that required maintenance and control, the heyday of the experimental Black Mountain College with the arrival of Buckminster Fuller and John Cage, and the foundation of the pioneering military-academic-industrial think tank the RAND (Research ANd Development) corporation. The topics furthermore comprise the leap of petrochemical synthetics productions that led to an explosion of fossil-fuel waste, Stalin’s “Great Plan for the Transformation of Nature”, the advent of cybernetics, the measure of digital information (the bit), the Havana Charter governing international trade and investment, apartheid, the Xerox copier, and Tupperware. 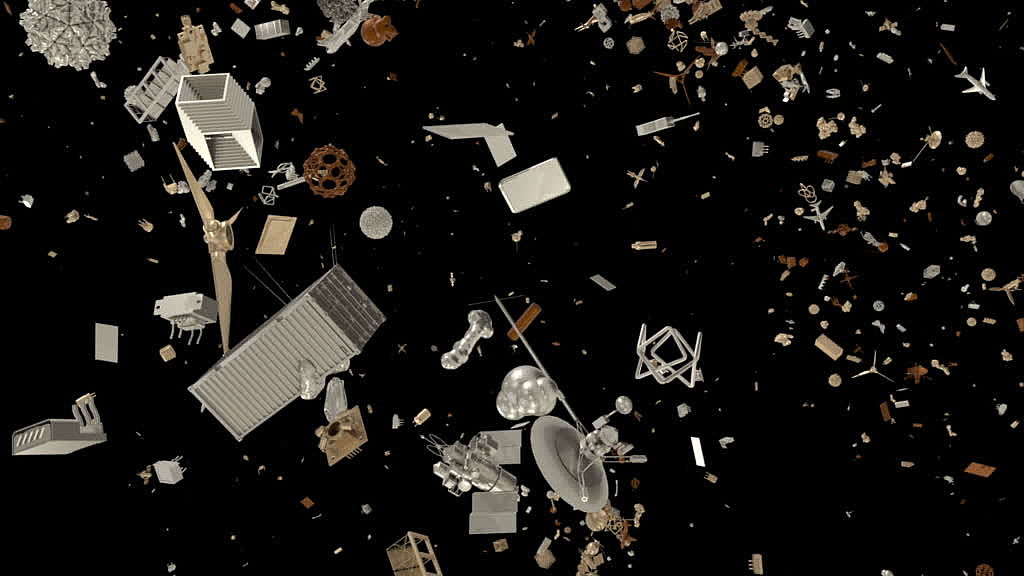 As a calibrating device at the conversion points between technologies, geology and biology, 130 essays, research pieces, case studies, interviews and artistic contributions – tied together in 17 curated thematic dossiers – explore the mechanisms and logics of the technosphere.

Culture and media theorist Benjamin Steininger from the group Beauty of Oil explains the fusion of the coal and petrochemistry industries since the 1920s and sk...

Environmental concepts have their own time. The media historian Orit Halpern describes the engineering-driven transformations of architecture and design since t...

... cybernetics has its breakthrough, the transistor is invented, the Universal Declaration of Human Rights are announced. Upon the rubble of two World Wars, radically new relationships arise between humans, machines and molecules.